The TIS GmbH is company of the year 2016 in Bocholt

On Thursday evening, TIS GmbH was honored in a ceremony as Bocholt’s company of the year 2016. Our managing directors Markus Vinke and Peter Giesekus, as well as the company founder Josef Bielefeld, accepted the award with great pleasure. The award ceremony took place in front of over 100 invited guests at the Hotel Residenz in Bocholt.

The sculpture “Innovation”, created by the artist Jürgen Ebert, was handed over by the major Peter Nebelo, the members of the Stadtsparkasse Bocholt, Karl-Heinz Bollmann and Joachim Schüling as well as Ludger Dieckhues, Managing Director of the Bocholt Economic Promotion and City Marketing Association. The prize is worth € 5,000, which will in a small part benefit our next summer festival for all employees and family. The larger portion we will donate to social projects. 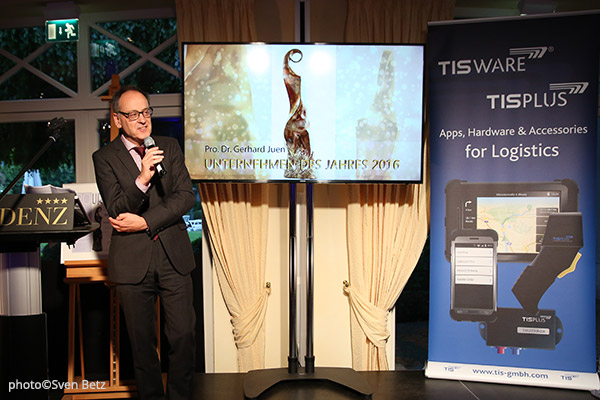 In his laudation Prof. Dr. Gerhard Juen honored the company founded in 1985 by Josef Bielefeld. Bielefeld had recognized his opportunity and had dared to take the leap into independence. Today, TIS is a medium-sized technology company with more than 50 employees. The company, originally focussed on hardware and measuring technology, has developed into a provider of innovative software solutions especially for the logistics industry and is a technology leader in the field of radio communication. The permanent need for innovation, among other things, is expressed through cooperations and projects with the Westfälische Hochschule. Practical semesters or topics for graduation work help the university to provide young people with a hands-on education. A number of employees were graduates of the university. As a result, the company is making an above-average contribution to keeping smart heads in the region. 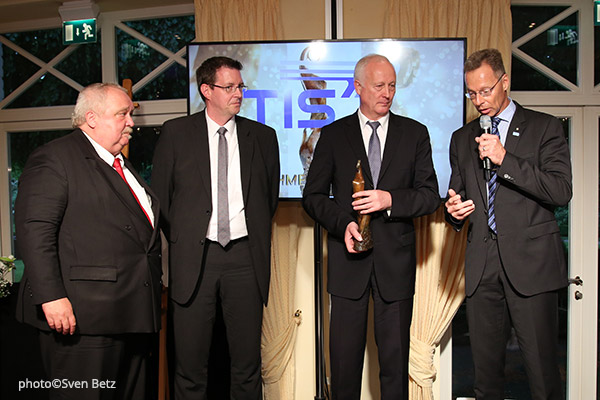 In his gratitude, the company founder Josef Bielefeld underlined that the award was also a recognition of the performance of the employees and of the families behind them, without whose support such an honor would be unthinkable. Visibly moved, Bielefeld accepted the prize and proudly confirmed that a “garage company” had become a medium-sized IT enterprise with international clientele and more than 50 employees. Managing Director Markus Vinke, himself a graduate of the Westphalian University in Bocholt, yet remarked how difficult it is now to get qualified employees and referred to new recruitment options of TIS.

The “Company of the Year” award has been awarded in a 2-year cycle since 1996. Since 2012, the Wirtschaftsförderungs- und Stadtmarketing Gesellschaft Bocholt has taken over the entire organization of the award sponsored by the Stadtsparkasse Bocholt.

At the same time, the „Bocholter Auszeichnung für Familienfreundlichkeit“ (BAFF) (Bocholt award for family friendliness), which is also awarded by the Bündnis für Familie in Bocholt e. V. (Alliance for Family in Bocholt) in a 2-year cycle, was awarded to the company Wohnwelt Fahnenbruck GmbH in the course of the festive celebration.

Photo (Michael Deutz): The award winners of the evening:

Joachim Schüling, Member of the Board, Stadtsparkasse Bocholt

Since 2000 online editor and copywriter. For several years, she writes and proofreads texts of all kinds as a freelancer for TIS. For the new blog she works as an editor and writes technical papers in close collaboration with the TIS team.

Useful information from specialists for the logistics industry